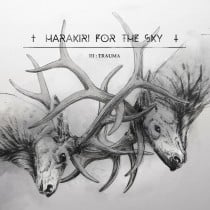 The new album comes in a 12 pages cross-shape Digipak.

Released in 2014, Harakiri for the Sky's Aokigahara reaped widespread critical acclaim for its startling synthesis of skyscraping post-rock textures and emotive black metal fury. Breathtaking and torturous in equal measures, the highwater mark that Aokigahara set has somehow been eclipsed by III: Trauma. Immediately, the album kicks off with an 11-minute epic titled "Calling the Rain," and indeed do Harakiri for the Sky summon forces both natural and supernatural. As the record winds through seven more equally scintillating epics, III: Trauma swells and swirls, crests and crushes, effortlessly dancing between genres with nary an ounce of self-consciousness. Not for nothing is the album titled Trauma: the emotional landscapes the band travail scrape both the direst depths and fleetingly blissful extremes of the human psyche.

But, as masterful as the band are at this point, this is not new territory for Harakiri for the Sky; they have been a steady work in progress from the start. Founded in 2011 in Vienna, Austria, the aim of Harakiri for the Sky has always been to create a unique mixture of melancholy and aggression, madness and meaning, and wrapped in alternately manic/mellow songs that bridged black metal and atmospheric post-rock. The band was initially begun as a studio project by erstwhile Bifröst member M. S. joined by vocalist/lyricist J. J., and has recently been expanded to a live lineup. With that lineup secured, Harakiri for the Sky then embarked upon four successful European tours with the likes of A Forest of Stars, Der Weg Einer Freiheit, and Agrypnie among others, encompassing over 20 countries to date. Now prepared to release the masterwork III: Trauma, Harakiri for the Sky will take this volatile-yet-beautiful new concoction on the road for the remainder of 2016: massive sound-walls and the barest of emotions await!