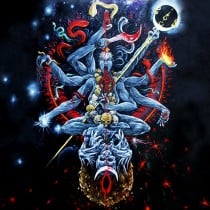 Cult of Fire‘s मृत्युकावीभत्सनृत्य isn’t quite the grey-matter-splatterer suggested by its title, especially the ?-heavy variation displayed if your browser lacks some languages. As they did on their 2012 LP debut, Triumvirát, the Czech trio continue to stretch out in the codified traditionalism of black metal’s second wave. Sure, there’s an overt Eastern spiritualism salving the howls ala Rudra, but that’s not much of a comparison. In fact, modern reference points on the whole are rather inaccurate. Unlike most of the nouveau, Cult of Fire don’t work like hell to get away from where black metal has been. They’re perfectly content within the well-worn walls of before. That makes them unique compared to avant-grafters who weld blasts upon surrogate styles. Cult of Fire stick out by not trying to be unique at all.

That’s an obscene slice of Spockian objectiveness to mention when मृत्युकावीभत्सनृत्य is blooming over eight tracks and nearly 48 minutes. It’s a special little thing. Perhaps that’s because it doesn’t wear black metal in the way teenagers wear band shirts. Cult of Fire appear comfortable under their own cowls. This isn’t a tribute, nor is it retcon-ing a history constantly fictionalized by shipping-obsessed genre nerds. It is Cult of Fire. They have their own voice. It may be colored with the inflections of its family and mentors, but the voice has lived enough to earn its own ticks. Heck, the body has its own scars. And, like Lykathea Aflame before them, those lessons learned provide a script of mantras extolling the unexpected, sweeping beauty of a metal state of mind.